WW1 Remembrance in Verse: “In Memoriam” and “Roll of Honour” Newspaper Columns

This is the last of my three blog posts in this period of Remembrance. It focuses on the WW1 period.

As the Great War progressed and the anniversaries of the Fallen came and went, the local newspaper “In Memoriam” and, later, dedicated “Roll of Honour” columns were increasingly filled with moving tributes to lost husbands, sons, fathers, brothers and fiancées. Although less frequent in late 1915 and throughout 1916, this phenomenon became particularly notable from 1917 onwards and endured in the years beyond the end of the conflict.

Many were recurrent standard verses, or variations on standard themes: grief; absence; young lives cut short; a mother’s pain; religious sentiments; Remembrance; doing one’s duty; sacrifice; wooden crosses; graves overseas far from home, or no known grave; not being present in their loved one’s dying moments; occasionally the difficulty of seeing others return; and even reproach for those who caused the war.

Although not war poetry, they are powerful representations of family grief and loss which echo across the ages.

My mother’s brother died in Aden whilst on National Service in 1955. These family tributes from another era are the ones which, in all my St Mary’s War Memorial research, left the greatest impression on her, resonating with her emotions 60 years later.

These “In Memoriam” and “Roll of Honour” notices provide an accessible window into this aspect of the War, the emotions of those left behind. They are also a continuing legacy for family historians. They can provide service details, place and even circumstances of death, names and addresses of family members (including married sisters) and details of fiancées all of which can aid research.

Here is a selection from the local Batley newspapers[1]. 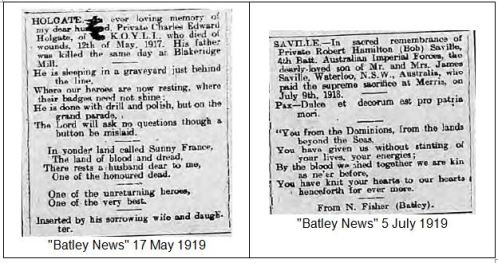 One response to “WW1 Remembrance in Verse: “In Memoriam” and “Roll of Honour” Newspaper Columns”