Lost in France (Or Belgium)? Not Me, Thanks to a Friendly LinesMan.

I’m back from my latest visit to the Somme and Ypres area. In 11 days I notched up in excess of 100 miles walking the battlefields. And, thanks to a fantastic piece of kit which I used for the first time this visit, I reckon on this trip few of those miles were as a result of getting lost and retracing steps.

Let me introduce my new guide: it’s called a LinesMan. WW1 Trench Maps put together in one handy package by Great War Digital.

This miracle-worker actually belongs to my husband. It was his Christmas present. But due to surgery a few weeks ago, he wasn’t up to miles of walking. I was. Hence I laid claim to it – and I’m now loath to let it go.

On Sunken Lane with my LinesMan2Go – Photo by Chris Roberts

I love walking the battlefields. In my opinion it’s the only way to get an appreciation of the distances and lie of the land facing those involved in the Great War. Normally I’m armed with walking guidebooks: Paul Reed’s ‘Walking the Somme’ and his old edition of ‘Walking the Salient‘; plus ‘A Visitor’s Guide: The First Day of the Somme: Gommecourt to Maricourt‘, and ﻿‘Battle Lines Ypres: Nieuwpoort to Ploegsteert‘ by Jon Cooksey and Jerry Murland. Brilliant though they are, occasionally the instructions are too ambiguous for me, which leads me up the battlefield equivalent of the garden path – the mis-communication trench.

For example, instructions such as “Continue through the woods…Approximately halfway along you will notice a track running off to your left at right angles. This was the junctionof Bunhill Row with the Strand” could be problematical if the route is unfamiliar. How can I be expected to know what is halfway on a path I’ve never trodden? Cue my LinesMan maps. I have the LinesMan2Go version, which is a Samsung Galaxy tablet preloaded with over original 800 geo-referenced digital images of British 1:10,000 scale trench maps of the Western Front in Belgium and France. The GPS shows exactly where I am via a red onscreen tracker circle, and the map pinpoints where the Bunhill Row/Strand junction is.  I can see exactly where I am in relation to the junction, a real navigation aid.

An illustration of this is the photo below on the Butte de Warlencourt walk from Paul Reed’s 2nd edition of ‘Walking the Somme‘. Proof I made it. 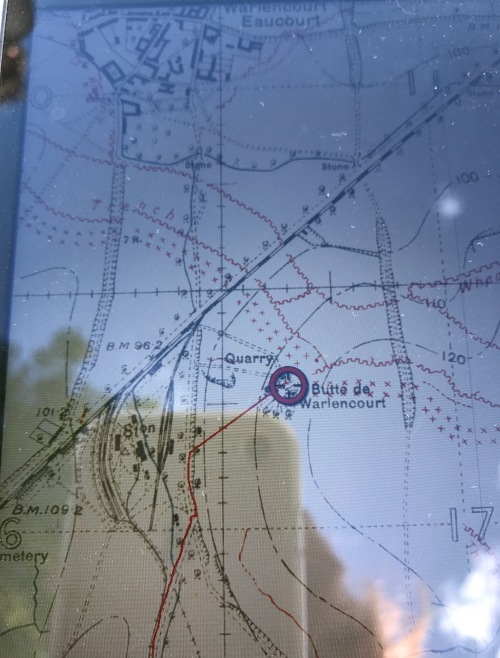 On other occasions its beauty is in its ability to confirm you have taken the correct overgrown track and are heading in the right direction – a welcome reassurance when you’ve been walking for ages in what seems like the middle of nowhere!

The option to track my route via the LinesMan, in conjunction with the guide book, gives an even greater understanding of the terrain. The maps cover different dates, so one area has several maps enabling you to see any changes over time as well as linking to modern times. The LinesMan is therefore a perfect partner to the books. No need now to take multiple bulky trench maps on my visits, and even worse find I’ve left the relevant one at home.

More than that though, the LinesMan is invaluable from a family history point of view. It has enabled me to track the final days of my ancestor Jesse Hill. He served with the 6th King’s Own Yorkshire Light Infantry (KOYLI) and was killed in action on 19 September 1915, near Ypres. The Unit War Diary includes a map of ‘H‘ Sector dated 27 July 1915, and it is in trenches in this Sector the battalion were based at the time of Jesse’s death.

Comparing this Unit War Diary map with the Bellewaarde Ridge & Hooge walk in Cooksey & Murland, then tracking my route via my LinesMan maps enabled me to confirm earlier research, and pinpoint with confidence the area in which he died.

Walking the actual trench locations wasn’t possible – a field full of turnips put paid to that  (at least that’s what they looked to be given my pathetic agricultural skills, *ancestors spinning in their graves*). But it was enough for me just to know I’d definitely nailed it. It also confirmed the fact that my previous visits, without aid of the LinesMan2Go, had put me in roughly the right area.  It’s good to have that final piece of confirmation though.

But it also has other uses. Map references, for example those CWGC ones indicating where bodies were found prior to being brought into concentration cemeteries, take on a new relevance with my LinesMan. I also liked the facility to map routes out as I walked them, so I could review my footsteps at the end of my walk. And flicking through the range of maps for a particular location across different dates show the changes (or not) which took place during the course of the war.

I do need to get more practice using my LinesMan (yes, I’ve claimed it) in order to familiarise myself with all its features and get the best out of it. Initial issues for me, which more practice should resolve include improving my speed in manipulating the various maps; I also found it extremely touch sensitive, so found myself inadvertently flicking maps – but again more use should remedy this. More problematical issues, which are beyond my control, relate to weather: too sunny and screen glare becomes an issue; too wet, and at times rain proved torrential, is even worse – I didn’t dare use my precious tablet.

As I mentioned I (sorry, Chris) have the LinesMan2Go version: a tablet with all the maps pre-loaded. That’s because I was a tad worried at my ability to transfer the maps to iPhone, iPad or Android device. For me the primary reason for the kit was to enhance my battlefield visits. But I would like to view the maps on my computer, beyond what is available via the National Library of Scotland maps. So for that reason perhaps I should have been braver and trusted my technological skills.

For more details about the Great War Digital’s LinesMan products, including how to purchase them, click here.

Finally, my review of this product is totally independent. I used the LinesMan2Go for the first time this visit, and was so impressed by it I wanted to share my experience.

A Grave Plot: Rest In Peace?

One of my guilty pleasures is to wander round the local cemetery reading the inscriptions on headstones. I love a good old inscription. I can while away hours strolling along the pathways and across undulating ground, pausing to read the words or simply admire the beauty and variety of these monuments.  The joy that discovering a family headstone can bring is a thrill that many family historians will relate to. But I’m not fussy. Even if the family is unrelated to me, if the inscription captures my attention, I will research the story behind it. For example, see my post about a young couple from Batley who died as a result of a wartime seaside cliff fall.

I naively always assumed some kind of permanency with a headstone. That centuries later it would still stand, somewhat weather-worn but erect, a relic of a past era, a witness to a life long gone. But this ideal is far from true. Close to home I’ve witnessed it. 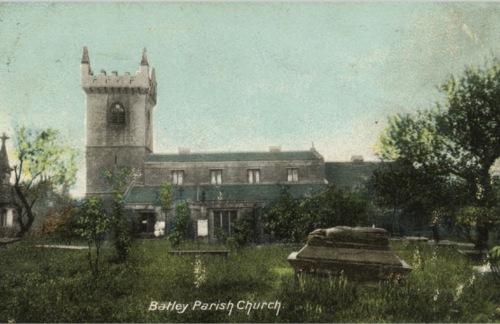 The claustrophobic jumble of headstones at All Saints Parish Church in Batley have long since gone. Similarly Mirfield St Mary’s Churchyard lost many of its old headstones, including that of my 5x great grandparents. I only know of it’s existence from a 19th century handwritten transcript of Memorial Inscriptions (MIs), via the Yorkshire Archaeological and Historical Society (YAHS) whose archives are now located in the Brotherton Library, University of Leeds. A local car business on Staincliffe Hall Road, Batley, on the site of a former Methodist Chapel, had the graveyard headstones in its driveway. I clearly remember seeing them as a child, when the Chapel was converted to a baby clinic. More recently they have vanished. I’m not quite sure when, but I would love to know what became of them. One small crumb of comfort is it appears MIs do exist for them, again via the YAHS. Even councils are not immune to headstone destruction. In 2011 Kirklees was criticised for a money-saving scheme whereby headstones, with inscriptions clearly visible, were recycled to build a wall in Netherton.

Even if they remain in situ, exposure to the elements may take their toll over time, wearing inscriptions to illegibility. They may be laid flat by councils if they are deemed unstable and potentially dangerous. Batley Cemetery, for example, is undergoing a memorial safety programme. I spent 15 unsuccessful minutes on hold with Kirkless Bereavement Services trying to find out what this entailed. From my visit to the cemetery often this means the headstones are frequently placed face-down, so those carefully thought-through lasting tributes are hidden forevermore. And with burial plots decreasing in availability, particularly in urban areas, many local authorities are looking at alternative strategies for public cemeteries. Then there is deliberate vandalism.

One thing I did not realise until arranging dad’s funeral is the terms under which burial plots are owned. I mistakenly believed if you bought a burial plot it belonged to the family for ever. Not so. You are merely leasing the plot. In the case of Kirklees Council the lease term is 50 years. Some local authorities have leases of as little as 25 years. The maximum is 100 years. In short you are purchasing the exclusive right to say who will be buried in that grave for a set period. The family can choose to renew the lease for a fee. For this reason it is important to keep address and contact details up-to-date with the relevant council bereavement services.

If the lease is not renewed, the headstone can be removed and collected by the owner – or destroyed by the local authority. Existing burials in the plot are not removed or disturbed, but remaining space in the plot may be resold.  So, with space for burial plots running low, the permenancy of headstones faces an extra threat.  Southwark Council, for example, face opposition to their cemetery plans with claims by Friends of Camberwell Cemeteries  that they are a ‘Grave Reuse and Reclamation Burial Strategy‘.

All this means the work of Family History Society volunteers, cemetery friends groups, those conducting one-place studies, projects such as BillionGraves and individuals in recording MIs will become ever more valuable. For example the Mirfield St Mary’s ones I mentioned earlier in this piece are included on the Kirkheaton Info Archive Database.

So do not assume that headstone will be there for ever. Photograph it now and make a note of that inscription just in case. And check out various archives, one-place studies websites, cemetery groups and Family History Societies for MI transcripts.