The Tale Behind a Tin: A Soldier’s Story

I was undecided when to write this post: Christmas-time or October 2017. It is about a Christmas present I received from mum and dad a few years ago – a Princess Mary Gift Fund box. So, on the face of it December would be the obvious choice. Instead I’ve decided to do it now as a tribute to a local soldier, for reasons which will become apparent. 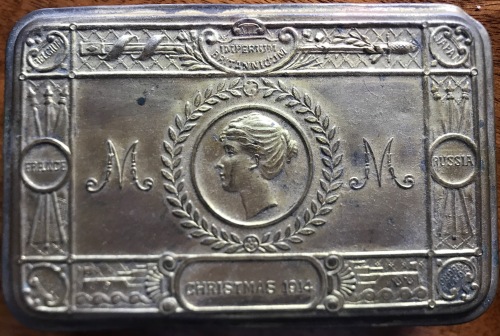 The embossed brass Princess Mary tins were given as Christmas presents for those serving at Christmas 1914. The gift was the idea of Princess Mary, daughter of King George V. A public fund was established to raise money for the boxes and their contents, which were tailored according to smokers, non-smokers and the religious sensibilities of minority groups such as Sikhs. Subscriptions raised over £162,590, far surpassing the amount required. Originally intended for those soldiers and sailors serving overseas, the eligibility was extended to include those serving at home, prisoners of war and the next of kin of those who died in 1914 – over 2,620,000

The smokers box contained pipe tobacco, cigarettes, a pipe, a lighter as well as a Christmas card and photograph of Princess Mary. The non-smokers version had acid tablets and a writing case with contents, instead of the tobacco-related gifts. However, supplies of these original gifts proved insufficient to fill the boxes, so alternative gifts were provided, including bullet pencils, tobacco pouches, cigarette cases, shaving brushes and combs. Whatever the contents, many tins were kept or sent home even when emptied, as they were useful cases. Many survive to this day.

My tin is minus its contents. But what I find particularly special about mine is it is purported to have belonged to a named soldier – George Henry Sorby of the 9th Battalion the King’s Own Yorkshire Light Infantry (KOYLI). Accompanying the box is a picture postcard of him. I vowed to research his life. This post is a result of that research. In the course of doing this work I discovered George lived fairly local to me, in a place I used to visit regularly with my husband.

George Sorby was born on 28 August 1894 at Warmfield, near Wakefield and baptised less than a month later at Sharlston St Luke’s. His parents were James and Ann Elizabeth Sorby (née Tweedle). They married in the other church in the parish, St Peter the Apostle at Kirkthorpe, on 25 December 1889. George was the third of the Sorby’s four children, and their only son. Eldest daughter Sarah Ann was born on 21 June 1890 whilst the family lived at New Sharlston. By the time Mary Emma was born on 18 July 1892 they were back in Warmfield. Mary died in December 1893. Their youngest daughter Martha Jane was born on 21 December 1896. She too died in infancy, in September 1900.

This was an area rich in coal, and James worked as a miner in the pits around Sharlston and Warmfield. The 1911 census shows George following his father in the industry, being employed as a pit pony driver below ground. This involved transporting the tubs filled with coal mined by the hewer to the pit bottom ready to be taken to the surface, then returning with the empty tubs. In this period, it was often the first coal mining job a boy undertook after leaving school, before eventually progressing to become a hewer. The family were now residing at Frobisher Row in Warmfield, and this remained the family address for the duration of the war.

George’s service records have not survived, so I’ve pieced this together from other sources.

Shortly after Britain joined the conflict, George enlisted in Normanton, becoming a private with the 9th Battalion of the KOYLI, service number 15766. The KOYLI had its traditional base in the heart of the West Riding of Yorkshire and a massive recruitment drive in the locality took place in the early weeks of the war. The 9th Battalion was formed as part of the K3 phase of Kitchener’s New Army – the third batch of 100,000 recruits who answered the call to arms. They came under the command of the 64th Brigade in the 21st Division.

Initially based in Pontefract, they moved for training to Berkhamsted, then went to Halton Park near Tring in October 1914, from there on to Maidenhead, back to Halton Park in April 1915 and finally Witley Camp in Surrey in August 1915.

Their Commanding Officer as of June 1915 was the deeply unpopular Lt-Col. Colmer William Lynch, a former regular officer, on the reserve officers list at the outbreak of war. It is said that before the Battle of the Somme, the officers in the battalion had a mess toast where tradition was to include a toast to Commanding Officer’s good health. Captain Gordon Haswell stepped up, but he omitted Lynch’s name, instead saying:

“Gentleman, I give you the toast of the King’s Own Yorkshire Light Infantry, and in particular the 9th Battalion of the Regiment……Gentleman, when the barrage lifts.”

Both Lynch and Haswell were killed on the first day of the Battle of the Somme and are buried in Norfolk Cemetery, Becordel-Becourt. But this was all in the future. 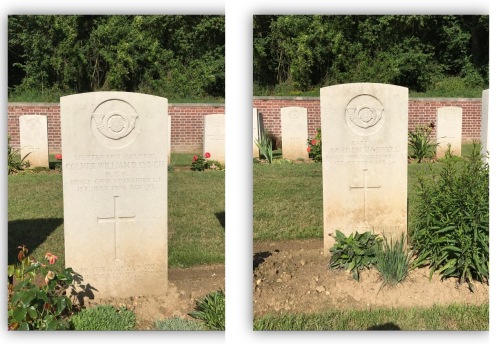 On 10 September 1915 the battalion’s first line transport and machine gun sections left camp for Southampton and sailed to Le Havre. The following day, the main body of the battalion left Witley Camp to catch the train from Milford station to Folkestone. They sailed on the SS St Seiriol at 11.15pm that night, bound for Boulogne. They arrived at 1am the following morning and, after a brief rest, made their way via Pont de Briques to billets at Zutkerque where they remained until 20 September. Over the subsequent few days they marched in quick succession, interspersed by one-night stops, from Arques to Fontes, onto Amettes and Four-A(ux)-Chaux, finally arriving at a bivouac between Philosophe and Vermelles on 25 September.

It was a hike of around 47 miles, the urgency designed to get them into position for their first action of the war. For the 9th KOYLI, including George Sorby in ‘A’ Company, were destined to participate in a major autumn attack, a baptism of fire for the men of the New Army: The Battle of Loos. This battle took place in the industrial, coal-mining area north of Lens in the north-east of France. It was the first large-scale British offensive of the war, and marked the first use of poison gas by the British Army. The attack commenced on the 25 September.

The initial phase did not involve the 9th KOYLI, who were part of the 21st reserve Division. They were deployed on day two.

Getting to their assembly positions for the day two attack on Hill 70 to the north of Lens was a lengthy, arduous process in the dark, over unfamiliar and difficult ground. They left their bivouac at around 7.15pm on the 25 September and did not reach the original British front-line trenches until about 1am the following morning. They then had to proceed another two and a half miles under artillery fire to the assembly position to the east of the original German front line positions.

The attack commenced at 9am on 26 September, with the 9th and 10th KOYLI still held in reserve. It was a confusing battlefield picture marred by miscommunication and misunderstanding. It culminated in 9th KOYLI independently committing to an attack at around 12 noon, whilst Brigade HQ desperately tried to get orders to them to halt any further advance and concentrate on consolidating.  It was carnage. The 9th KOYLI were quickly forced to retreat to the trenches. The Unit War Diary notes that by 1.30pm they had lost 215 rank and file, either killed, wounded or missing. Final figures indicate 47 killed. By 3am the following day they left the trenches and were on their way back to a bivouac between Vermelles and Nouex les Mines. Their first taste of battle was bloody, short-lived and costly.

George’s initiation typified it. He suffered a gunshot wound to the neck in this very first encounter with the enemy. He was evacuated to Number 2 General Hospital at Quai de Escales, Le Havre where he underwent treatment for 2 days before being shipped back to England on the Hospital Ship HMHS St David. The former steamer was requisitioned at the outbreak of war and commissioned into service as a ship to transport patients back to Southampton.

George did recover and returned to serve once more with the 9th KOYLI. His war finally came to an end during 3rd Ypres, otherwise known as Passchendaele. This offensive lasted from 31 July to 10 November 1917. He survived the Battle of Broodseinde Phase on 4 October, where once more the battalion suffered heavy losses. The Unit War Diary indicates in the period 1-8 October casualty totals were 20 officers and 360 other ranks.

Trench Map Showing Location of the 9th KOYLI on 22 October 1917: Source – National Library of Scotland  http://maps.nls.uk/index.html
under the terms of the Creative Commons Attribution-NonCommercial-ShareAlike (CC-BY-NC-SA) licence.

Now an Acting-Corporal, on the evening of the 21 October the battalion were once more in front line trenches, near Reutel to the east of Polygon Wood. The above trench map shows the location, circled in green. Early the following morning, the 22 October, the Unit War Diary notes:

“Enemy shelled trenches heavily between 4 A.M. and 7 A.M. the shelling being particularly severe in reply to our barrage at 5.30 am. C Coy. in support suffered several casualties.”

Nine men, including George, were killed. 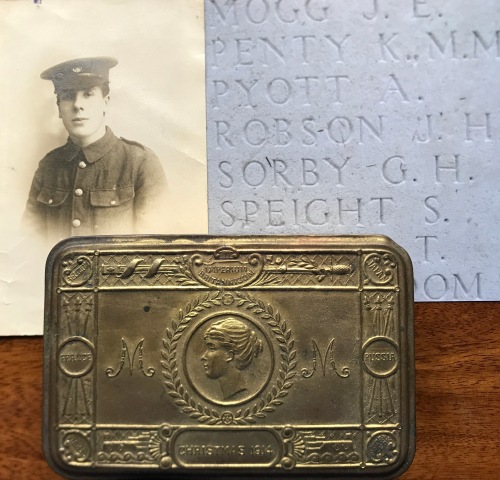 George Henry Sorby , the Princess Mary Tin and his Inscription at Tyne Cot – by Jane Roberts

George’s parents eventually moved to Normanton. His mother died in around late October 1929. His father died in February 1939. Their burials are recorded in the Warmfield Burial Register. His sister Sarah Ann, who married Henry Rann on 23 February 1913, had two children – Margaret Kathleen in March 1917 and Cyril born in 1923. She died in 1977.