Living DNA: I’m Not Who I Thought I Was

My Living DNA results have proved a bit of a curate’s egg. Good in parts, but leaving me with major question marks in others.

I’m 100 per cent from Great Britain and Ireland, which correlates with my research so far. I’m also predominantly of Yorkshire ancestry; more precisely South Yorkshire which, as defined by Living DNA, roughly comprises the South and West Yorkshire counties. Park that piece of information.

Given what I know, my next largest component is unsurprisingly Ireland at 9.2 per cent – but I also know this is a massive underestimate and should be nearer 50%. My research so far shows this is all County Mayo, so my 4th ethnicity component of 6.2 per cent southwest Scotland and Northern Ireland is not a shocker either, with its proximity to Mayo. But that’s where it ends.

My family history research does not match my LivingDNA results in some fairly significant areas. My ancestral origins research doesn’t go back the estimated 10 generations the LivingDNA results capture. But my research shows North East England ancestry,  from the Durham and Northumberland areas: one set of 4x great grandparents were born in those counties (Ann Jackson in Northumberland and Robert Burnett in Durham). The evidence is backed up in several record sources, most crucially a documented, bitter, removal order dispute.

Yet my LivingDNA standard result, the one which links to the test’s best-guess reference population ancestry sources, does not show any ancestry in their designated Northumbria area. This roughly equates to the Northumberland/Tyne and Wear/Durham/Scottish Borders/Fife areas. Neither does Northumbria feature in my complete result, the one where the test attempts to allocate the unassigned 7.7 per cent of my genetic make-up to regions where it look most similar.

Perhaps Ann and Robert’s parents (my 5x great grandparents, John Jackson/Elizabeth Hayes and Stephen Burnett & his one-handed gypsy mistress Charlotte) all migrated and settled in that area from elsewhere – possibly Cumbria or Scotland. Despite me not yet having any ancestors from north of the border, my standard result has identified percentages from three of the Scottish areas (albeit one of those is the aforementioned Scotland/Northern Ireland region).

The other conundrum is the absence of any North Yorkshire trace in the standard test, basically the North and East Ridings. The explanation may simply lie in proximity to county boundaries and 1974 boundary changes. I have relatively recent (if you call 18th century recent) ancestry around the Sherburn-in-Elmet, Saxton-in-Elmet, Brayton and Hemingbrough areas. These all fall within what is now North Yorkshire. However, prior to 1974 the first three were in the West Riding. Hemingbrough was in the East Riding, but it is only five miles, as the crow flies, to Brayton. So they could conceivably fall within the LivingDNA South Yorkshire zone. My complete results do pick up a trace 1.2 per cent North Yorkshire ancestry.

Other surprises? Well the shock for this white rose Yorkshire lass is she has genetic components from the dark side of the Pennines, possibly (whisper it) the red rose county. Though, in the absence so far of any North West roots, I’m claiming that any such ancestors must be from the Cheshire/Merseyside/Staffordshire and not Lancashire parts. We’ll see what further family history research down the line turns up.

I also have Welsh DNA – 5 per cent in total from North and South Wales. And then there’s the 3.8 per cent Devon and 3 per cent Cornwall. So THAT’s why I’m addicted to Poldark!  And I’ve a remarkable absence of southern-ness.

My Ancestry test is 100 per cent European. Of this 52 per cent is Great Britain and 44 per cent Ireland. In terms of their Genetic Communities, I fall within two of the nine regions assigned to the UK and Ireland as follows:

The confusion here is the Genetic Communities of my parents are slightly at odds with me, as shown below.

And mum, given her dad is from County Mayo, may be disappointed with her “likely” Irish North Connacht outcome. 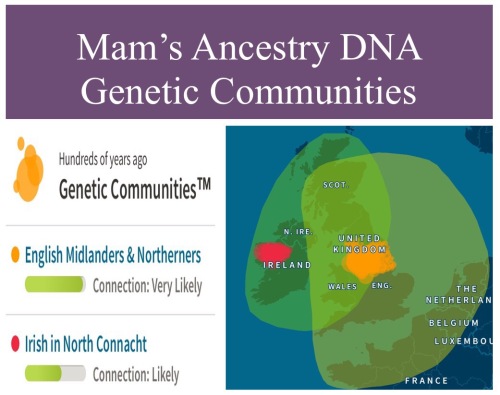 At a simplistic level, it’s easy to ask should not all the results be the same? After all, there’s only one genetic me (hurray!) But delving deeper, the difference is not unexpected. The companies have different reference groups, time measures and, possibly, a different emphasis on the ethnicity element of their tests as opposed to the DNA matching side. LivingDNA is much more of a deep dive into 21 British/Irish genetic groupings (80 worldwide ones), rather than the broad-brush overview given by Family Tree DNA and, to a lesser extent, Ancestry’s nine UK/Ireland regions.

Finally, for those DNA experts, my LivingDNA Mitochondrial DNA (mtDNA) has me in Haplogroup U4, Subclade: U4b1b1. U4 is found in low frequencies across much of Europe and Asia, more commonly in populations near the Ural Mountains and Volga River in Siberia. According to LivingDNA U4 is “an old group, which helps to explain the relatively low frequencies in populations today. It is now thought that haplogroup U4 was involved in migrations into Europe from the Middle East that occurred before the end of the last ice age”.

So, to sum up, my test leaves me with much more work to do to build my tree to try to prove these new elements to my ethnic make-up. But it also gives me some new migration theories to work with.