“You’ve a Mother and a Father. That’s All You Need to Know” – Batley Borough Court Records: Part 3

I thought long and hard before writing this post, the third in my Batley Borough Court paternity proof series. The reason for the deliberation is it concerns family information not discussed for years, if at all in living memory. “You’ve a mother and a father. That’s all you need to know” is a phrase that springs to mind. But I wanted to know more than that. So on and off I ferreted away at records.

The deciding factors for me in going ahead in writing this are:

I was elated with the find. Here the Batley Borough Court records have solved one of my long-standing family mysteries, as outlined in an earlier post about Parish Registers. It relates to the paternity of my great grandmother Bridget Gavan’s second child, a daughter, born on 28 August 1893.

The parish priest at St Mary of the Angels, Batley, at the time of the child’s baptism the following month believed Bridget to be married. The baptismal entry in the parish register is under the name “Regan” and Bridget’s husband is named as Charles Regan. The only problem: Bridget was not married. So proof you cannot always take what is written in parish registers as 100% accurate.

A later priest realised the error. When the girl’s marriage took place, some decades later, he noted against her baptismal entry that she married under the name Gavin [sic]. Yes the priests were meticulous in the practice of annotating baptismal entries with later marriage details!

But, although the baptismal entry gave a potential lead into the child’s father, I could not definitively identify Charles Regan. Not until a search of the Batley Borough Court register.

On 5 February 1894 Bridget Gavan was the complainant in a bastardy case heard at Batley Town Hall against Charles Ragan (note the subtle spelling difference here). Charles was ordered to pay 3/ a week until the unnamed child reached the age of 13. As well as court costs he also had to pay birth expenses of £1:1:0. So this provides corroboration of the baptismal paternity information.

Charles Ragan features a further eight times in the Borough Court Register between 1894-1907[1]. Three of these relate to police charges of drunk and riotous behaviour in various areas of Batley. The other five are cases brought by Bridget for bastardy arrears. Full details are at Table 1.

It can be seen from the entries that Bridget gave Charles time to pay on two occasions. Some of the bastardy cases took place after Bridget’s marriage in November 1897. And some of the adjudications around the bastardy arrears involved straight custodial sentences, without the option of paying a fine.

This then led me to the collection of West Yorkshire Archives Prison Records on Ancestry.

Bingo! I was astounded to find 20 entries in the Wakefield Prison Records Nominal Registers relating to Charles for appearances before West Riding Courts at Wakefield and Dewsbury as well as Batley. They relate to the various bastardy cases heard at Batley, outlined above, as well as charges in all areas for drunkenness and non-payment of costs.

It appears that even where Charles had the option of paying a fine he chose not to do so, or perhaps simply could not afford to, and the alternative custodial sentence was enforced.  This includes one of the instances where Bridget had allowed extra time: Hence the large numbers of entries for him in the Wakefield prison register.

For my research purposes these entries provide a basic description of Charles, his age, religion, occupation, education level and, crucially, a birthplace. Although the records are not consistent, particularly around education levels which range from “imperfect” to “read and write” through to Standards I-III[2], they give a general picture.

Charles was around 5’5” tall, with brown hair, had only a very basic level of education and his employment varied from colliery worker to miner to labourer, so manual work. His birthplace was given as Leeds and further narrowed in some of the register entries to the Beeston/Holbeck area.  And his date of birth was somewhere between 1869-1876. Despite the variations, they clearly all relate to the same man given the detail provided including the previous custodial reference number.

The entries are summarised in Tables 2a and 2b

Looking at the censuses with this fresh information, Charles Joseph Ragan, to give him his full name, was born in Holbeck in 1869. He was the son of Irish-born coal miner John Ragan and his wife Sarah Norfolk, a local girl from Hunslet. The couple married in 1866 and by the time of the 1871 census the family was recorded living in Holbeck. Besides Charles other children included six year-old Hannah Norfolk, three year-old Thomas and infant daughter Sarah.

1891 shows a move to East Ardsley and two further additions John and Sarah’s family – Alice born in around 1882 and Walter in 1884. Charles now worked as a coal miner, like his father.

The work opportunities in the relatively new pits in East Ardsley probably initiated the move from the Leeds area. The town’s extensive collieries were owned by Robert Holliday and Sons, with East Ardsley Colliery being known as Holliday’s Pit. They started to sink two shafts here in 1872, on land leased from the Cardigan estate. A third shaft was sunk in 1877. By 1881 in excess of 300 East Ardsley men were employed in mining. In 1899 the colliery produced 200,000 tons annually, making it the 11th largest Yorkshire coalfield.

Returning to Charles’ brushes with the law, newspaper reports added a little more detail, but not much. For example in the March 1900 case around arrears, Bridget revealed that Charles had failed to make payments for their seven year-old daughter for three years. Possibly this corresponded with the time Bridget was involved with her soon-to-be husband, who she married in late 1897.

The reports also indicate Charles lived at Lawns in August 1897 and thereafter in East Ardsley. Did his forays from there into Batley indicate he remained in loose contact with his daughter?  Or were other family connections the draw? There were a number of Ragans living in Batley during this period.

In terms of character, Charles certainly seemed fond of a tipple, given the number of drink-related offences. One from the West Riding Police Court, Wakefield, involved the assault on William Forrest, the landlord of an East Ardsley pub, the “Bedford Arms“.  George Mullins was his partner in this crime. The report in the “Sheffield Daily Telegraph” of 24 August 1897 read:

“…the defendants did not appear, it being stated they had left the district. On the afternoon of Friday, the 13th inst., the defendents went to the public-house, created a disturbance, refused to leave, and on being forcibly ejected, Mullins bit the landlord on one of his arms, both men struck and attacked him, and defendants re-entered the house and again assaulted the landlord“. 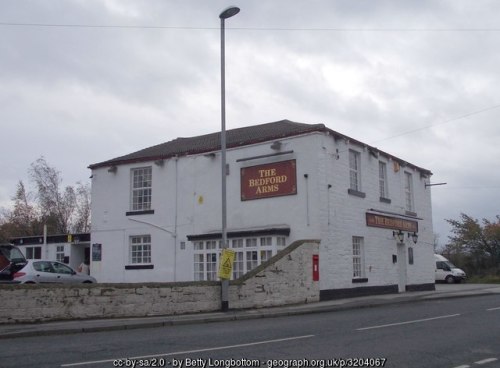 So what became of Charles Ragan? By August 1906 he was free of his weekly payments for his daughter, she being 13. It appears he married 34 year-old widow Jane Worth (maiden name Sow(e)ry) on 24 December 1911 at St Mary the Virgin, Hunslet. A quick scan of GRO records reveals the birth of three children, all registered in the Hunslet District between 1913 and 1917.

Charles’ death is registered in Leeds North in Q4 1932. He was 63. He is buried in Hunslet Cemetry.

Bridget died in 1947. Their daughter died more than 45 years ago.

See here for Part 1 and Part 2 of my Batley Borough Court series of posts.

[1] Up until the end of my search in 1916
[2] See The Victorian School website for a descriptor of the various levels as they applied from 1872 http://www.victorianschool.co.uk/school%20history%20lessons.html