Festive Adverts and Shopping in Batley: A 1915 Christmas – Part 1: “The Home Beautiful”

In the run up to Christmas I’m writing a series of seasonal blog posts with a family and local history theme. In the opening three posts I look at shopping in Batley in 1915, as described in the local press.

Adverts and shopping articles were a feature in all local newspapers up and down the country in the weeks leading to Christmas.

These kinds of newspaper pieces and adverts – giving shop descriptions, detailed location information, and the wares on sale – provide a picture of the area in which ancestors lived, add colour to research and complement the information from other sources such as Directories and maps. They also provide a unique insight into the period for a family historian. And it is all the more useful if your ancestor worked in one of the featured shops!

Although the shops I describe are based in my home-town, the type of retail outlet and products sold would be seen in most towns in the country in this period.

By way of context, Batley and the surrounding Heavy Woollen District had prospered in the early part of the war. Its fabrics were much in demand by the military and business boomed. So, even if prices in shops were higher, the employment opportunities, wages and bonuses paid to mill workers went some way to offset this. Also, notably in these early war years, many shops made a virtue of not including wartime additions to the cost of stock bought in at old prices. So the implication given by the press was Batley residents were still relatively well-placed to put on a good show at Christmas.

Batley folk were exhorted to celebrate Christmas 1915 with cheerfulness and a generous spirit. It was claimed this would contribute to national optimism.  So, as families suffered the anxiety of separation and news of dead and injured servicemen reached home, shops were decked out in patriotic emblems, usually centred on the Union Jack or flags of Allies, and these Christmas adverts began to fill the newspapers.

The first ones appeared in the “Batley News” towards the end of November 1915, and by the beginning of December they increased to a steady flow. So a much later start than today’s Christmas retail push.

As for items designed to make a 1915 Christmas celebration, unsurprisingly alongside those traditional food and household goods, many products had a military theme or were directly aimed at our “gallant lads” and “plucky nurses”.

Like today, updating the house for Christmas played a part in preparations, the season being described as an ideal time to adorn the home with new goods.  Mr Preston Jenkinson’s shop, located by the Batley Tram Terminus, was hailed as probably the largest vendor or linoleum and flooring products for miles around. Products included linoleum, oil-cloth, rugs, fringe, mackintoshes and bedsteads. Its plain pricing, courteous staff, range of stock and the fact that “the huge store is one of those rare places where the stranger may have a really good look round before being pressed to buy” were virtues for those “bent on buying well for Christmas”.

Hanover Street’s Messrs W North and Sons was another store for those with an eye for “The Home Beautiful” to frequent. This shop also sold oil-cloth, linoleum, dainty rugs and the “latest creations of carpet factories”. Beyond this they stocked enamelled curbs and hearths and inlaid furniture, “the choicest products of the cabinet-maker”.

Flowers also played a part in the festivities. Messrs J Hick and Sons at Wheatcroft was described as “a joy to the eye and a refresher to the soul” whose flowers could “be bought and transferred to the home, to give radiance and fragrance throughout the holidays”. Besides flowers, seasonal evergreens such as mistletoe and holly decorated homes. And, as a time to remember departed loved ones, shops promoted wreaths and crosses to lay at last resting places. Ironic given the number of families who would never know final resting places as the war progressed.

Mr Arthur Kemp’s greenhouses and gardens in Wellington Street, facing the baths, was a Batley institution. Residents were urged to walk around the greenhouses to select tea-table and school party blooms; Christmas decorations for home, church and grave; bridal wreaths and buttonholes for the winter wedding; and the central piece at Christmas – the tree. 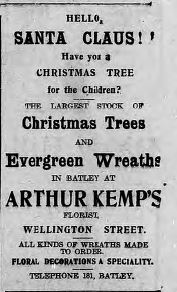 Music was important in Christmas celebrations and family gatherings. Mr W S Beaumont’s Henrietta Street music store stocked gramophones and thousands of records so “no home need to be without mirth and music at the festive season” with “such seasonable strains as ‘The Hallelujah Chorus,’ and good old carols like ‘Good King Wenceslas,’ followed by sprightly jigs and reels, or by patriotic spirit-raisers like ‘Britannia’ and the ‘Marseillaise”.

Player-pianos and rolls were available, promoted as a way to play music without undertaking years of study. And for those already proficient pianos, violins and wind instruments were on sale. The shop had repair facilities and Mr Beaumont would consider weekly payment in approved cases. Santa Claus could supply children’s bugles and drums from the shop too!

In my next post I will cover Christmas toys and gifts, including those aimed at soldiers and sailors on active service abroad or in training at home. It can be found at: https://pasttopresentgenealogy.wordpress.com/2015/11/25/festive-adverts-and-shopping-in-batley-a-1915-christmas-part-2-gifts-galore-for-man-woman-and-child
Sources:
“Batley News” – various November-December editions.

4 responses to “Festive Adverts and Shopping in Batley: A 1915 Christmas – Part 1: “The Home Beautiful””