Tuesday 12 October 1915: the day when the runaway 4.10 afternoon tram from Earlsheaton wreaked havoc in Dewsbury town centre, eliciting comparisons to war-torn Belgium. One soldier witnessing the aftermath exclaimed “It’s just like Ypres”, whilst other sightseers observed it was “A bit of Belgium” or likened it to a Zeppelin raid.

Losing control on the steep incline of Wakefield Road, the tram shot past the Dewsbury terminus, careered past the end of the lines and over the setts, before finally crashing into buildings on Market Square. Here it demolished Messrs Hiltons Boot Shop, several upper rooms of the popular Scarborough Hotel hostelry and badly damaged the neighbouring Messrs Lidbetter, Sons and Co., provision merchants. In the course of its destructive path the tram also collided with two horse-drawn vehicles near the Town Hall. 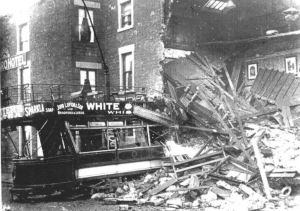 One early theory for the accident was the slight  drizzle on Tuesday afternoon caused the Number 3 tram to skid – greasy tracks had caused an incident in the same spot previously. But this was discounted by an eye-witness account from one of the injured. Mrs Oldroyd said that the trolley pole had left the overhead wire higher up the hill leaving the driver with no means of braking.

A notoriously treacherous location, it was counted fortunate that the latest mishap occurred in the late afternoon of what was half-day closing in the usually busy town. At 4.20pm the shops were shut and only a few people were around. As a result only seven people were injured. These were listed in the newspapers as:

It is the latter two passengers who link to my family history. Violet Pinder was the youngest daughter of my 3x great grandmother Ann Hallas and her husband, the wonderfully named Herod Jennings. A large family of 12 children Violet was born in Heckmondwike in 1866. Along with her siblings William, Eliza and Rose she was baptised at Staincliffe Chirst Church on 5 November 1868. The family seemed to go for mass baptisms or none at all![1]

Violet worked as a cloth weaver prior to her marriage, and this continued intermittently afterwards. She married coal miner Samuel Pinder on 4 August 1886 at Batley Parish Church. Subsequently Samuel worked as a fish salesman. Ethel, the daughter caught up in the runaway tram incident, was the second of their six children.

At 4pm that Tuesday afternoon Violet and her recently married daughter decided to go for a walk. Some discussion ensued as to the route to take before, arm-in-arm, the pair decided to look at shop windows in town. They had not gone very far, just above the Town Hall, when they heard the noise of the approaching tram and screaming. Before they could take any action the tram smashed into the back of the pony and cart of general carrier, Mr Benjamin Buckley. He had tried, but failed to avoid the collision by turning into Rishworth Street, at the corner of the Town Hall. It was too late. His cart, carrying a load of rags, was sent flying and knocked down the mother and daughter.

Ethel came round to find herself lying in Wakefield Road near to the pony. There was some suggestion her injuries were caused by the pounding of the horse’s hooves as she lay unconscious in the initial aftermath. Violet lay prostrate some distance away in Rishworth Street, her left boot badly cut and torn with the heels of both taken clean off by the force of the accident. Ethel summoned up enough strength to run over to her mother where she promptly collapsed, unable to move any further.

As luck would have it in the motor vehicle behind the tram was trained nurse, Miss Maude Kaye. She rendered first aid to the victims until medical assistance arrived. Ethel and Violet were conveyed initially to the Town Hall before a horse-drawn ambulance took them, the conductor and conductress to Dewsbury Infirmary. The Oldroyd family were less seriously injured and returned home after receiving treatment at the scene of the accident.

Ethel was able to leave hospital the following day, and the newspapers reported early in November that John James and Maggie had also left hospital to recuperate at home. Violet was less fortunate though spending several weeks in hospital recovering from her injury.

A century on all the locations are very familiar to me. I walk past Staincliffe Church regularly. And only tonight I drove down the very steep incline of Wakefield Road from Earlsheaton to Dewsbury.

[1] 16 June 1857 marked the baptisms at Hartshead of children Henry, Ellen and Louisa. Henry was 13 at the time, and not the son of Herod. My 2x gt grandmother, Elizabeth, was not baptised until 1901. Other children do not appear to have been baptised. I’ve not traced any non conformist records either, so perhaps an indication of religious ambivalence.