Last weekend I finally gave in and subscribed to Fold3 taking advantage of their cyber week special and buying annual premium membership at a 40% discount of $47.95. The deciding factor was the need to view their exclusive record set:- the Western Front Association (WFA) collection of Pension Record Cards and Ledgers.

Dependents of each serving British soldier, sailor, airman and nurse who was killed in the Great War were entitled to a pension. So were those service personnel wounded or otherwise incapacitated. For those who died the next of kin and pension amounts are detailed in the cards and ledgers. For those who survived they provide details of injury (wounds, illness), plus regimental details (unit, regimental number) and home address. The latter are particularly important for researchers, as those who survived are often more difficult to find information about, especially with common names.

My interest was driven by the need to find out more about my great uncle Michael Callaghan, brother of my grandpa John. The son of Michael Callaghan and his wife Mary (née Murphy) of Carabeg in County Mayo, his birth date was registered in the Swinford District as 17 January 1890.

It’s a date I take with the usual large pinch of salt. His baptism at Glan Chapel, according to transcripts, took place on 1 January 1890, pre-dating his birth and indicative that he was born in late 1889 – Irish catholic baptisms taking place shortly after birth. This is a common theme with my Callaghan ancestors – their official birth dates often postdate their baptisms. It was easier, and more important, to be received into the church. By the time they got round to official registration, dates were fudged to avoid late registration fines.

Mum said she thought Michael served with the Irish Guards during World War One and had received a severe facial injury. She cannot recall ever seeing him, and believed he lived in Leeds. She said she’d been told he was tall, with very dark hair like his mother and, in his youth, had been very good-looking.

A few years ago, the possible I’d come up with, based on the assumption his injury resulted in his military discharge, was a Private Michael Callaghan of the Irish Guards, service number 11415. According to the Silver War Badge Rolls he enlisted on 31 July 1916 and was discharged on 29 July 1918, age 29, no longer physically fit for war service as a result of wounds. His Badge Number was B71936. Checking with Michael’s Medal Index Card it also showed he had served as a Private in the Labour Corps, Service Number 702152. But this entirely speculative search proved nothing, so I parked the information in my research file. 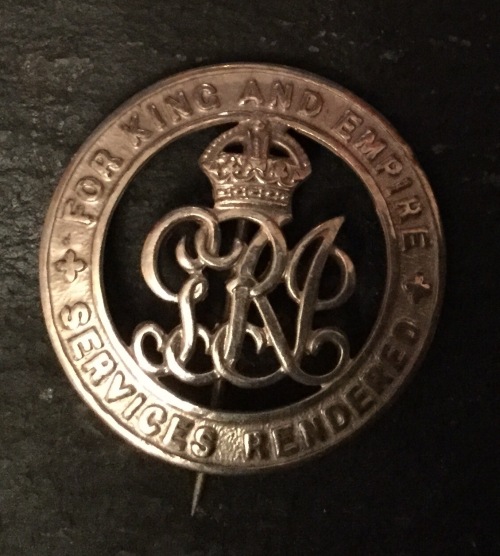 The Pension Record Cards and Ledgers on Fold3 offered a new avenue to explore. Still being uploaded, when I checked on 6 December 2018 there were four records relating to the Silver War Badge Pte Michael Callaghan. They confirmed his injury as a gunshot wound to his face, and the degree of disablement which was attributed to his war service ranged between 40 to 60 per cent. He was awarded a life pension. Interestingly two different birth years were given – 1889 and 1890. The records indicated he was unmarried. Mum seems to think he did marry and had two sons, but she isn’t entirely sure and has no names.

They also gave three addresses – none though in Leeds. The earliest record had an address of Carpenters Arms, West Woodside, Lincoln but also indicated a permanent address of 18 Bound[a]ry Street, Bury. By 1924 the address was recorded as 55 Union Street, Hemsworth, Wakefield. These latter two addresses were of particular interest. My Michael Callaghan had brothers with links to both Bury and Wakefield.

Checking the 1911 census, a 47-year-old widow named Catherine Walsh lived at 18 Boundary Street, Bury. Also in the household were her four surviving Bury-born children Martin, Mary, Annie and John, whose ages ranged from 17-24. There were also two nephews listed – 30-year-old Barney Roan and 25-year-old Thomas Callagn, both miners. They, along with Catherine, were born in County Mayo (recorded as Maho in the census).

This 1911 census entry is a perfect illustration of not relying on indexes: both Ancestry and TheGenealogist record Thomas’ surname as Roan in their index, whilst FindMyPast’s version is Collagen.

Thomas piqued my interest – Michael’s brother Thomas settled in Bury. The surname wasn’t too far out – I’ve seen many a mangled version of Callaghan. His date of birth was 19 November 1884 giving an age of 26 at the time of the census – so not too far out either.

Catherine’s address was also 18 Boundary Street in the 1901 census, when her husband John Walsh was alive. Checking the GRO birth indexes for the registration of Martin, Mary, Annie and John revealed Catherine’s maiden name as Bones or Boans.

I next turned to the Lancashire OnLine Parish Clerk. The marriage of John Walsh (Latin form Joannem used in the parish register), son of Joannis Walsh, and Catherine (Catharinam is the Latin register version) Bones, daughter of Andreae, took place at St Joseph’s Catholic Church, Bury on 29 November 1884.

This was perplexing – so far my Callaghan line doesn’t link to either Bones or Walsh. So was Thomas, described as Catherine’s nephew in the 1911 census, really my grandpa John’s eldest brother?

I decided to look for the baptisms of John and Catherine’s children, again using the Lancashire OnLine Parish Clerk. And it is here Catholic registers come into their own. Anna (Latin form of the name) Walsh, daughter of Joannis Walsh and Catherinae, formerly Bones, was born on 26 August 1888 and baptised at St Joseph’s on 16 September 1888. And the priest helpfully annotated the entry, stating Anna married Thos. Callaghan at St Joseph’s on 15 June 1912.

Unfortunately, this marriage has not been transcribed on the Parish Clerk site. However, the baptism of two of the children of Thomas and Annie are there, including Mary (or Maria as recorded) born on 14 April 1914. The priest’s note that she married Gulielmo J. Dunne on 24 May 1947 was enough. My mum attended this wedding – Mary was her cousin. Bingo! The same family.

One final corroboration was the 1939 Register entry for Thomas and Annie Callaghan. The birth dates of 19 November 1884 and 26 August 1888 matched. Mary’s married name of Dunne has also been added – the Register was a living document used subsequently by the NHS as it’s Central Register.

So now I have a link for Pte Michael Callaghan back to my Callaghan family in Bury via the 18 Boundary Street address on the pension entries. And it appears I have now evidence of my great uncle’s Great War military service and injury, corroborating what mum heard as a child. I’ve still a fair way to go – I would like to learn more about his war service. I also want to know if he did marry and have a family. I also want to find out when he died. But I have now made a start as a result of the Pension Cards and Ledgers.

If you are a member of the Western Front Association you can now access these records using your membership login and without having to subscribe to Ancestry/Fold3. Here’s the relevant information. As of this month about 37% of the total archive has been digitised, so it’s worth checking back as more are rolled out in 2019.