A “German” Family in WW1 England – Pork Butchers in Liversedge

Whilst browsing a September 1914 edition of “The Batley News” an announcement in the public notices column caught my attention. Addressed “To All Whom it May Concern” it read as follows:

“Notice is hereby given that Mrs Christiana Schulz and her family are all naturalised British subjects and, in the present circumstances, it has been deemed advisable that the public of the immediate neighbourhood should be made acquainted with the following facts, namely:-

1. Mrs Christiana Schulz, now residing at Frost Hill, Liversedge, is the widow of the late Mr George Schulz, and she, along with her late husband and family, have resided in England for a period of nearly 50 years.
2. The late Mr George Schulz and his wife and family for a period of over 14 years have been naturalised British subjects and gave resided in the immediate neighbourhood.
3. All the children of the late Mr George Schulz are British-born and are loyal British subjects.
4. The late Mr George Schulz prior to his death carried on, and since that date his Widow in conjunction with her family have carried on, business in the immediate neighbourhood as ‘Pork Butchers’ under the style of ‘George Schulz and Sons’ in an honourable and straightforward manner. The said business has been carried out at the following addresses namely:- Frost Hill, Liversedge, Batley Road, Heckmondwike and 165, Bradford Road, Moorend, Cleckheaton.
5. Since settling in England they gave to the utmost of their ability discharged in a proper manner all their obligations as British subjects.
6. England is the country of their adoption and their interests and sympathies are entirely British, and notwithstanding rumours to the contrary they have neither relations in nor any interests whatever in Germany. On the other hand they desire it to be publicly known that as loyal British subjects their interests and sympathies are purely British, and by this Notice to intimate to the public that their sincere desire is for the ultimate success of the British and their Allies in the present regrettable struggle.

I was intrigued by the notice and wondered what became of the family. However I failed to find any further reference to Christiana Schulz in the GRO indexes. I could track her up to the placement of the notice, but thereafter I drew a blank.

In terms of family prior to this public proclamation of British sympathies, I first traced what appears to be George Schulz in the 1871 census. A 21 year old pork butcher from Germany named George Schalz is lodging with the Wray family in New Bridge Street, Dewsbury. As this is just one of a number surname variants which occurred in records for the family I’m not too hung up about the spelling. All other details fit in with what I’ve discovered.

Thereafter followed a steady flow of children born country-wide. These are detailed in the table below: 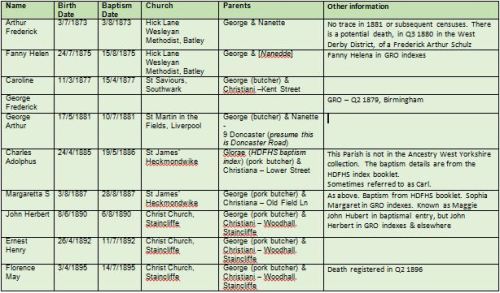 The censuses corroborate the family’s journey round the England, with their children’s birth locations corresponding with baptismal details. I’ve not discovered George Frederick’s baptism, but censuses identify Birmingham as his birthplace (1). GRO baptism indexes record the Q2 1879 birth registration of a George Frederick Schulz in the Birmingham Registration District.

The family census addresses were:

I’ve not traced a death for Nanette or a marriage for a George and Christiana. But, as mentioned, the censuses combined with the baptism details are the main reasons for my suspecting Nanette is Christiana:

I’d love to obtain some certificates to prove or disprove the theory. However, given their cost, it may be on permanent hold. The Schulz family are not part of my ancestry and I still have certificates I want relating to my own family history research.

Some censuses indicate George and Christiana were from Württemberg, Germany. George’s birthplace is confirmed in his February 1900 naturalisation papers. He was born in the Württemberg town of Langenburg,  the son of George and Margaret Schulz.

Probate records show George died on 6 April 1911. He was 61 years old. But there were plenty of family members to continue his business. Sons George Frederick, George Arthur, Charles, John Herbert and Ernest were all engaged in the trade. Son-in-law Carl Schuler, also from Langenburg (2) and husband of Caroline, owned a pork butcher’s business in Shipley.

However, their Great War fate continued to niggle me. It wasn’t my ancestry but so many of the locations associated with the Schulz’s were familiar to me. Staincliffe Church is less than ten minutes walking distance from my home; the location of their Batley Road shop is a similar distance and I can recall a butchers shop there, although it may not be the same one; I can see the Woodhall area from my window, about five minutes walk away; and I discovered they had a Healey business which burned down in 1891 – the area I’ve spent most of my life in. So I wanted to know how their story ended. 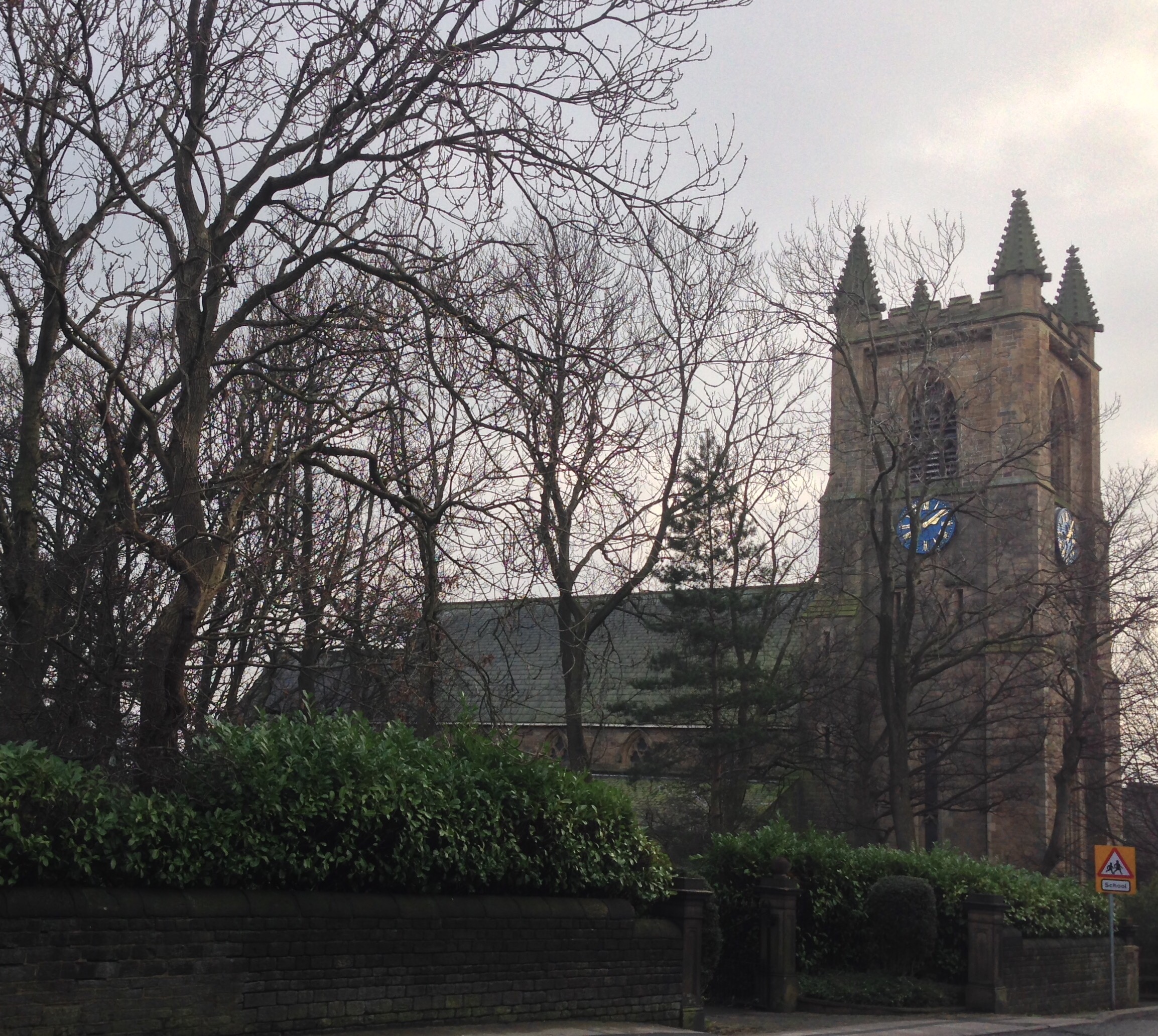 Staincliffe Church, scene of a number of Schulz baptisms & marriages

I knew British attitudes to foreign nationals changed at the outbreak of war, with Germans living in the country categorised as “enemy aliens“. I was also aware that, naturally enough, anti-German feelings were prevalent and hardened as the war progressed, especially after incidents such as the May 1915 Lusitania sinking.

From August 1914 newspapers carried numerous reports ranging from boycotting of German businesses, to attacks on and looting of German shops, even those belonging to naturalised British subjects. Many of these attacks were on the shops of pork butchers, a trade particularly associated with Germans. And many occurred in West Yorkshire.

One incident was far too close to home for the Schulz family. On 29-30 August 1914 anti-German riots broke out in Keighley. Over the course of the weekend a huge, angry, largely Irish mob attacked shops owned by tradesmen of German origins, including several pork butchers. Fuelled by alcohol and spurred on by cries of “Down with the ***** Germans”, “Come on: Let’s do to the ***** Germans the same as they are doing to the Belgians” and “Who will join Darcy’s Army” (3) they caused pandemonium in the town, terror to the citizens and injuries to several policemen. They also caused damage estimated at over £400. One shop was even set alight.

As I’d discovered from the 1911 census Charles Schulz had a pork butcher’s shop in Low Street, Keighley. And indeed his was one of the shops attacked. The 12 September edition of the Yorkshire post states:

“Next the crowd went to the shop of a pork butcher named Schulz, in Low Street, which was also damaged and rifled, the windows being kicked through”.

The violence is also referred to in Lyn MacDonald’s “1914: The Days of Hope”. It contains the reminiscences of Eva Leach, daughter of a Keighley publican. She recalls the attacks on, and looting of, the pork butchers in Keighley. She recalls the Schulz’s as a “nice couple with a baby“. When the looting of their shop commenced “the Schulzes rushed next door and sheltered with the Mitchells until the trouble died down. Mrs Schulz was in an awful state, quite terrified“.

Undoubtedly this is the incident which prompted the family to employ a solicitor to place the newspaper notice within days of the Keighley events. If Christiana’s son’s Keighley shop could come under attack, so could the family’s Frost Hill business. The notice is powerful testimony to their concerns and the threat they were under.

But I was still no nearer to finding out what happened to Christiana after September 1914.

Then finally in January 2016 the final jigsaw puzzle piece clicked into the place. Not by any research on my part other than generally sharing the September 1914 notice on social media (4). As a result someone told me they believed the family adopted the English surname Schofield.

“The Gate Hangs High” is a book by Mildred Coldwell. It recounts her family memoirs about living in Heckmondwike between 1909-1921. A passage from it provides confirmation of the wartime name change:

“….there were quite a number of families in the Spen Valley of German descent who were ostracised by a section of our community. One such person was Mr Schultz [sic] (5), the pork butcher, whose spotless shop was up Frost Hill, a man and his family respected by us all. I cried when I heard that a stone had been thrown through his shop window. Mr Schultz wasn’t a German, he was one of us, a Spen Valleyer. Arthur, his little boy, was in my class at school and would even fight in the playground. Anyhow, the Hun wore helmets with a spike on top, and I couldn’t imagine Mr Schultz wearing one of those. But he stood his ground and showed everybody that he didn’t want to be a German, he was English, so a new sign was put up over his shop ‘Schofield’s Pork Butchers”. Mr Schultz had made his choice. It was lovely to go down with a basin as usual for half a pound of warm, roast pork covered with gravy, and served by the now Mr Schofield, smiling once more, standing there in his lovely, laundered blue and white striped apron, sharpening his long knife on the hone fastened on to a polished leather belt round his ample waist. Quite a few more families with German names followed his example”.

The changing of Germanic surnames to British sounding ones was not unique to the Schulz family. Many adopted this device to hide their origins and proclaim their Britishness.  Even the Royal Family did it in 1917, ditching Saxe-Coburg-Gotha in favour of Windsor.

Further corroboration of the Schulz to Schofield change comes with the death of Christiana in 1922. The National Probate Calendar has the following entry:

I’ve loved researching this family and feel there is so much more to discover. The early 20th century is my favourite period of history and I enjoyed researching it from a slightly different perspective: that of families of German origin in England during World War 1. This is just one family. I’m delighted to find they remained in England. 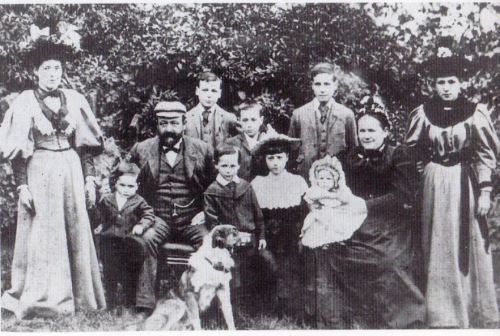 (1) The 1911 census says Worcester, Birmingham. Others state Birmingham, Warwickshire
(2) Taken from his 1912 naturalisation papers
(3) One of the ringleaders was William Darcy
(4) Spen Valley Family and Local History Group on Facebook
(5) A son of George carrying on the family business