Our Rugby League Great War book is due to be published in the summer. So each month, until publication, I’m doing a brief update. This is the January review.

First off: I’ve learned my working style is a total contrast to that of my co-author and husband. One year on and my inner civil servant is still alive and kicking. Administration, organisation, project planning, milestones. Red/amber/green traffic lights. A need for proper, documented information so anyone picking the work up knows exactly what’s been done and what needs doing.

Then there’s Chris. Laid back to permanently snoring sums it up. As long as he’s writing and chatting he’s happy.

I’d blocked January off for book research, based on the numbers of remaining men he’d given me. Only for him to reveal early in the month that he’d underestimated. Significantly. The number remaining was almost double what he’d told me before Christmas. To him, this was but a minor issue, of absolutely no consequence. For me January proved a period of mild panic.

And as January drew to a close, with over 30 men completed in the month, I find I’ve still 16 more men to research. The panic ratchets up a further notch. Hence the dearth of blog posts. In fact a lack of anything else, including social life and leisure time. Meanwhile my co-author feels it’s all going swimmingly.

I’m doing the research. Chris is doing the administration, co-ordination and writing. Except, ever the journalist, he’s focussed on writing. Anything else doesn’t matter.

If only I could step back from research, I’d take over all but the writing. As it is, I simply don’t have time….because of the numbers miscalculation.

Every week I go over the same “to-do” list with him, which consists of:

Every week he tells me he’s done it. Then I realise he hasn’t done it. Then he says he meant to do it, but got distracted. Then I say it needs doing. And so it continues in ever decreasing circles.

The upside: he’s a fantastic writer and his love, enthusiasm and knowledge of the subject shines through. Today though is his admin day, or so he’s promising. The photo below is the evidence. 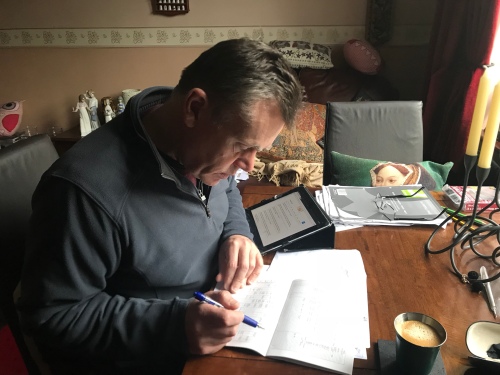 Maybe it’s a false dawn though and I can save myself a blog post, as my end of February update will be the same.

Permission to scream requested and granted.